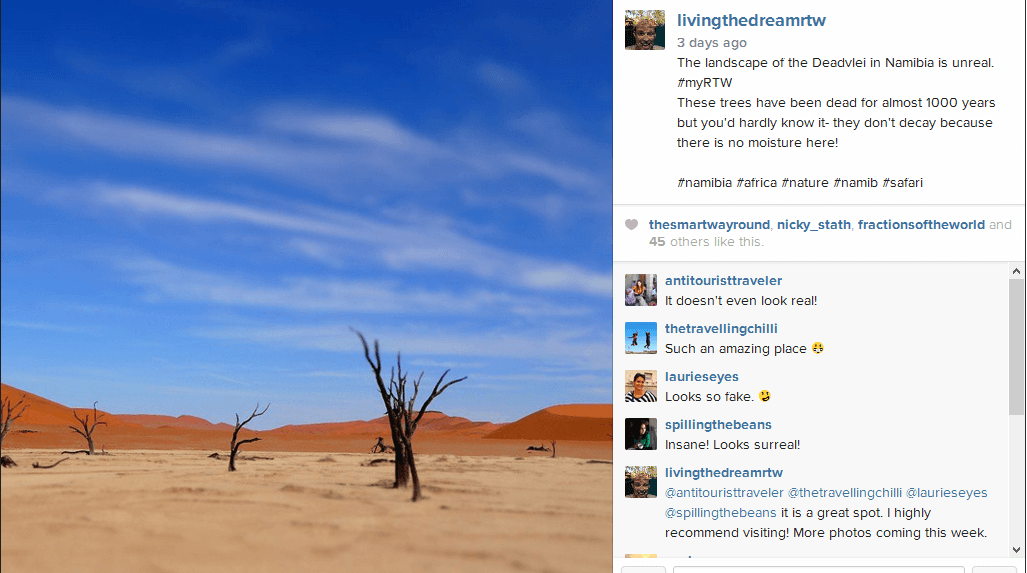 I was a late adopter of Instagram. Where I spent years amassing a large following on the other social media networks through social advertising, my foray into this network did not begin until September 2014 when I finally purchased my first smartphone.

By most standards I consider my growth on Instagram to be rapid. In just 100-days I had a following of 500 and an engagement rate of 5-10% depending on the update (which does not happen as much on other social networks). The next month after that my following grew by a further 50%.

I attribute this growth and engagement to three main travel Instagram strategies:

In this article I want to ignore the first two topics, and instead focus on the third: participation in popular Instagram tags. This is something many of the top Instagrammers have noted as being one of the keys to their success, and I made it my quest to figure out why that is.

As a new Instagrammer, one of the things I struggled with was determining which hashtags were worth adding to an update. Although the service will save previously used tags for easier use later on, something about adding 20+ travel hashtags to every single share was too time consuming, and spammy looking, for my tastes. Likewise, my research into popular hashtags on Instagram came back with only horrible ones like #love or #instagood which have nearly 1 billion photos between the two and likely move so fast that no one will even see your update anyway.

What about hashtags that people can actually see and, more importantly, engage with? As it turns out this information was not reported very well in any study I could find (when compared to Facebook marketing, for example), so I decided to figure it out for myself.

My initial plan of attack for Instagram was simple. The first tags I attached with my updates were #travel #[continent] #[country] #[city] as this was the simplest way to place all of my photos into the categories I wanted them to go to (regardless of if anyone else was using them).

Second, I spoke with many top travel bloggers on Instagram, like YoungAdventuress (37,000 followers at the time of posting), who told me to try and find the official hashtags of tourist offices (both country and city) and put them on the update as well. So in addition to a city like #Paris, I would also toss on #ParisJeTaime, the tourist board's official tag and tag the tourist board's account using the embedded tag feature.

Not only do these Instagram tags go to a large community of active participants, many tourist boards regram photos from the tag, giving the opportunity to reach even more users (note that use of official hashtags or tagging a tourist board may constitute as permission to regram. Those who do not want their photos shared should be careful of this).

Finally, I created my own hashtags, #myRTW and #behindtheblog, which will be talked about in a future article.

That brought me up to around 6 or 7 tags in each update. Compared to other users this was still a low amount, and it got me thinking: are there any other hashtags worth including?

To figure this out, I conducted a one month test.

Travel Hashtags in a One Month Test 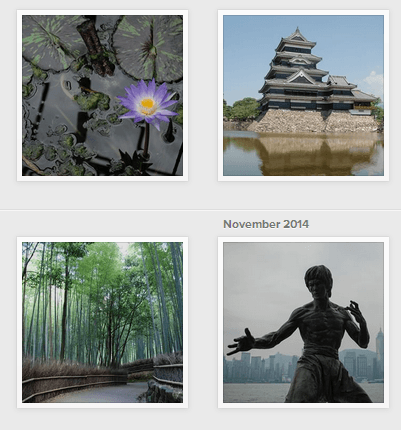 The premise of this test was simple: to determine the engagement rate our top photos would receive in popular travel hashtags.

The hashtags chosen for this study fell into two unique categories, split roughly 50/50:

The tags used in this study were:

The Results of Adding Travel Hashtags 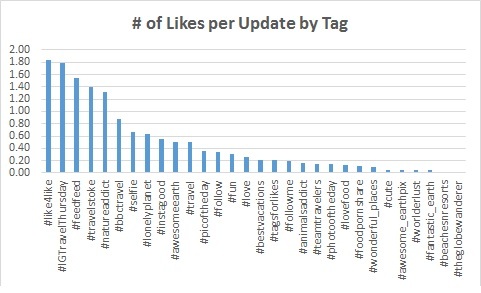 The chart above presents the average number of likes per update for each of the hashtags used in this study.  To give an example, #IGTravelThursday received 41 likes on 23 photos, or 41/23 = 1.78.   We presented the data this way to average out the number of likes as the number of images used in each tag was not uniform.

Overall, I'm a bit disappointed as the highest travel tag only netted an average of 1.78 likes per image – most of which were individual users going through and liking 4-5 images at a time after opening our feed from the tag stream.  But when you compare this to some of the worst performing Instagram tags, which netted a grand total of 0 likes, this is also quite good.

What this tells me is that adding four or five of the most popular hashtags to my images may only net around 7-10 likes in addition to my own follower engagement.

Not encouraging for most tags.

Does The Number of Images in a Hashtag Matter?

The tags used in this study ranged from about 10,000 images in the tag to 800,000,000 images in each tag, and the turnover rate of recent images was all over the map.  Unfortunately there was no clear correlation to number of images in a tag versus engagement rate. While the tags with hundreds of millions if images did result in our images getting pushed down at an incredibly fast rate, we still received 0.25 – 0.50 likes per update, right around the average engagement rate in our study.

The one exception to this?  #Like4Like was the best performing tag in this study, bringing in 1.84 likes per update.  But in looking around the users who participate in this tag, I'm not confident many of them would truly care about the content I'm posting (although there were a few travel accounts participating).  I even had someone respond to a photo saying “10 likes for 10 likes” which I ran away from at an alarmingly fast pace.

So the popular hash-tags on Instagram from our control group aren't awful, but aren't that great unless you want to be a spammer.

The Real Benefit of Tags 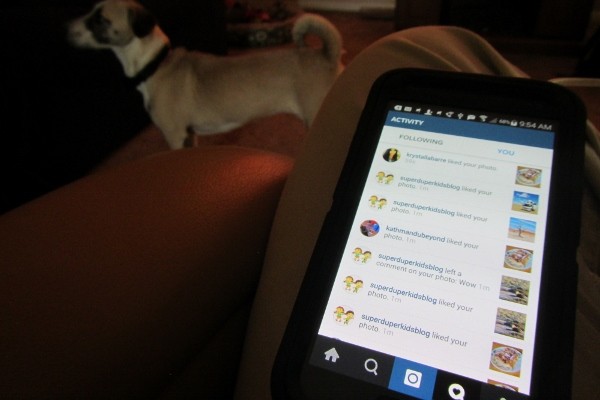 If there is one thing this study taught me, it is that best Instagram hashtags aren't going to bring in engagement. I suppose if you loaded up each image with 30 tags that bring in 0.5-1.5 likes per update you'll end up getting 30 or so likes from tag users, but overall I'm not sure if it is worth the time.

What I would use hashtags for is giving myself exposure to gain followers.

I can't officially claim that hashtags bring in more new followers than not (unless you say, got into the Top 9 for an image- picking tags that allow this for your account size could give even better results), but I did notice a rise in my daily new follower rate throughout the duration of the study (keep in mind that we were also doing other updates at the time). Where we were receiving about 5 new followers per day prior to the study, we rose to an average of 10 new followers per day during the study. Many of these were real travel accounts with substantial posting history and not spammy accounts looking for follow-backs.

The only thing I can say with absolute certainty is that we were not featured in any 3rd party article during this time that would contribute to this rise in followers, and a visual look through our recent community additions does suggest a notable percent came from those who found us through the hashtags featured in this study.

So your engagement rate from hashtags may be low, but they can be beneficial for picking up new followers who may otherwise not notice you on Instagram.

So What Are the Top Instagram Hashtags For Travel?

Going forward I'm going to maintain my structure of #travel, #[continent], #[country], #[city], any official tourist board branded hashtags, as well as our own customized tags like #myRTW and #behindtheblog when appropriate.

Travel tags I'm going to continue participating in are #IGTravelThursday as it was the most popular travel tag, #feedfeed for food photos, as well as #travelstoke, #bbctravel, and #lonelyplanet as they have the possibility of being regrammed on Matador Network, BBC Travel, and Lonely Planet, respectively.

For additional tags, I may continue to search on popular hashtag tracking services, like Iconosquare, to find more relevant tags for each photo than the ones featured in this study.  For example, a recent search for a Greece update with the terms “Greece” and “Greek” came up with #greecestagram #greeklife and #greekfood which have 10,000 –  200,000 images in each.  If any of the data from this study is transferable, these tags won't add a huge engagement value, but it would put our images in front of a more focused audience that may end up following us in return.

I draw the spam line there.

We have a new study! Check out our latest test where we found an incredibly efficient way to gain Instagram followers. In this particular test we took one account from 600 fans to over 30,000 in under six months and another from 2,000 fans to 12,000 in under three months! Check it out at the previous link! 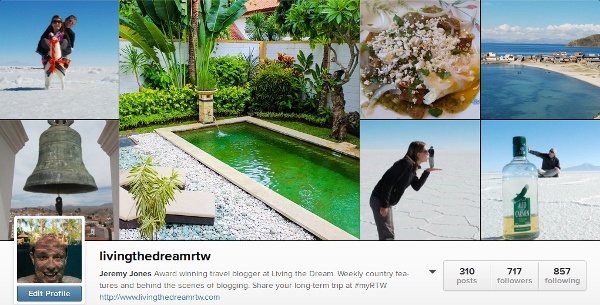 Follow us on Instagram to enjoy beautiful travel images from around the world. We feature a weekly country feature in our #myRTW hashtag series, and behind the scenes of how we run our blog on weekends in our hash-tag #behindtheblog.

Do you have any hash-tags you have seen good results with on Instagram that are not featured in this article, travel or otherwise? Comment below to let us know about it. Who knows, we may repeat this test with more tags if we hear enough ideas!

Looking for more information on how to promote your blog? Click the previous link to learn all of our secrets!

19 thoughts on “Instagram Travel Hashtags – Which Ones are Worth It?”