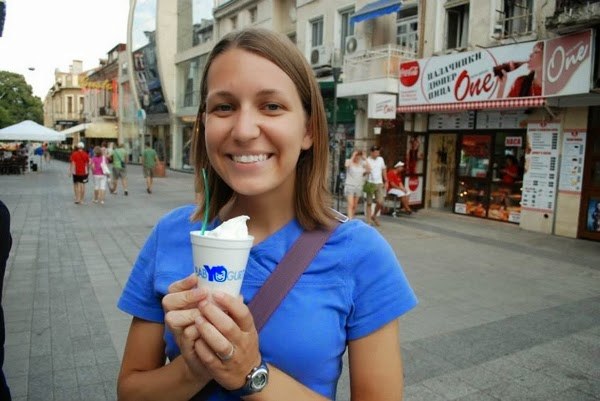 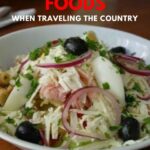 After being underwhelmed by the food in Turkey when I had expected to fall in love with it, I took my first bites of Bulgarian food skeptically.

Sure, it was served in an adorable, colorful ceramic pot, but how good could it possibly be? Wasn’t Bulgaria supposed to be the home of meat stews and brown sauces? As it turns out, my first Bulgarian meal was not only good, it was so good that I practically left the restaurant skipping with joy.

This scene was repeated after nearly every meal I enjoyed while traveling in Bulgaria, and six foods stood out among the rest as being delicious no matter where we tried them. 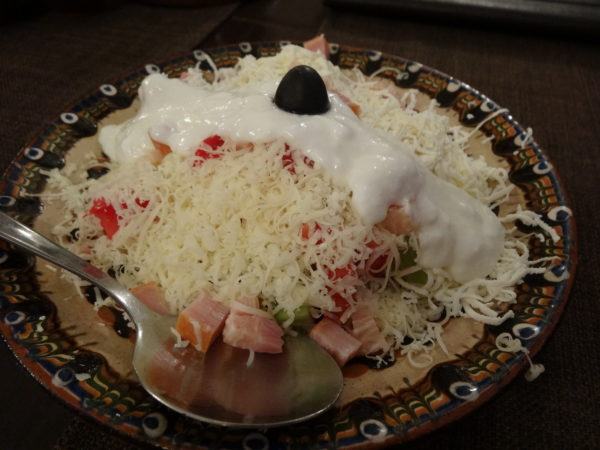 In a country where there are only two major types of cheese and they are described on English menus as “white cheese” and “yellow cheese,” you wouldn’t necessarily expect either to be good. However, we became addicted to “white cheese,” or sirene cheese.

It is similar to Greek feta, but it’s saltier, milder, and even more heavenly than feta. You’ll find this cheese in many different types of food such as pastries, salads, and baked dishes.

I am pretty sure there were a few meals where it was in every dish that we ate.

Yogurt originated in Bulgaria, and the strain of bacteria that distinguishes Bulgarian yogurt from other yogurts supposedly can’t be grown anywhere else in the world.

It’s a shame, because we really liked the yogurt here. Now, if you’re on a search for really great Bulgarian yogurt, you need to drive around and look for a shack that sells the homemade stuff, or stay at an inn like we did that had phenomenal homemade yogurt.

The store-bought stuff was good, but nothing beats homemade.

A lot of the yogurt is made with goat’s milk, which I expected to be really ‘goaty,’ but it was rather mild and really delicious. 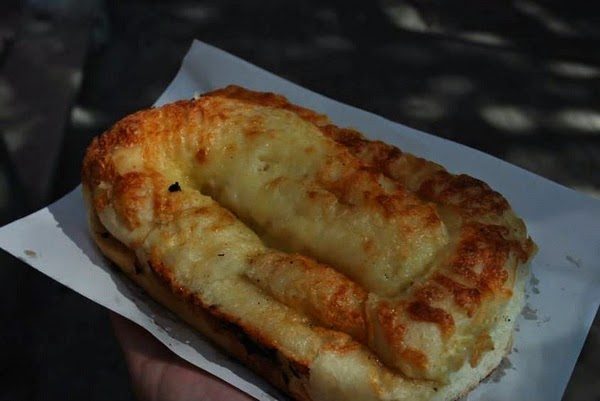 There are bakeries on practically every block, and the window displays beckon you to stop by. Most of the baked goods seemed to be variations on the theme of bread + cheese = heaven.

Our two favorites were the traditional banitsa made with a flaky dough and filled with sirene cheese (or other things, but we always stuck with the cheese), and what I can only describe as cheesy bread.

This bread was shaped sort of like a giant flat cinnamon roll. It was soft like a roll and topped with cheese before baking so that it developed a nice cheese crust on top.

And if that doesn’t get your mouth watering, imagine a layer of sirene cheese baked in the middle. Mmmm! This is one thing that I must learn how to make. 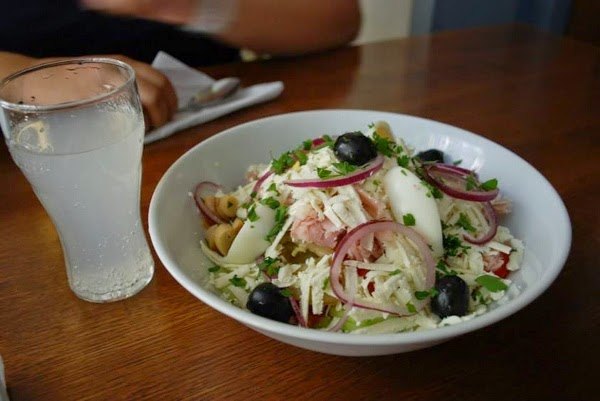 We met someone from Romania just before we went to Bulgaria, and he kind of made a sour face when we asked about Bulgarian food and told us that there isn’t anything fresh there. Our experience couldn’t have been further from that.

I think we had a salad with almost every meal (and it seemed most everyone else did, too).  And I’m not talking about some wilted iceberg lettuce with grated carrots and purple cabbage.

I’m talking about beautiful tomatoes, crisp cucumbers, pungent onions, tasty peppers, and, of course, a mound of creamy, salty cheese to top it all off.

There are so many different delicious salads, but two of our favorites were the shopska salad (basically what I described previously) and the ovcharska salad (shopska ingredients plus egg, ham, and sometimes olives). 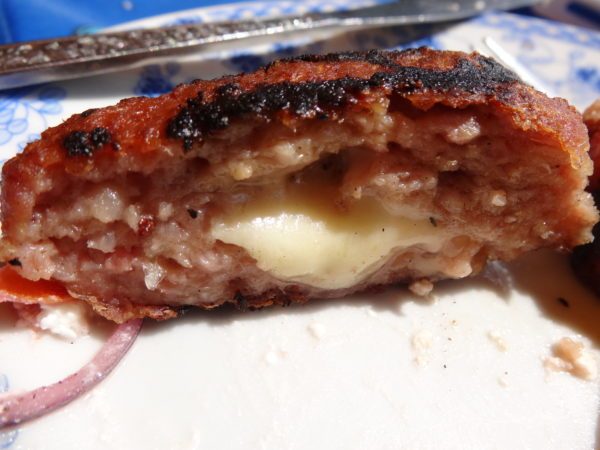 Coming from Turkey, we expected Bulgarian meatballs to be similar to Turkish kofte, which we were just ok and were definitely meat overload.

However, the meatballs we had in Bulgaria were typically made of pork and also had onions, parsley, garlic, and other seasonings inside to give your palate some other flavors besides straight up meat.

One of the more interesting and tasty meatball variations we had in Bulgaria had yellow cheese stuffed inside. 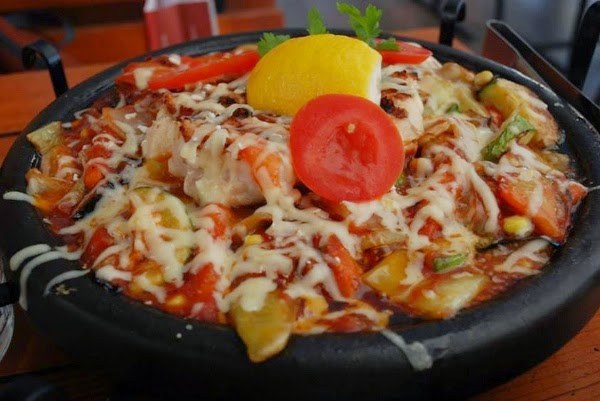 One of my favorite things about Bulgaria was “baked dishes” or “hot dishes,” as you’ll see them categorized on English menus. They’re basically baked casseroles served in beautiful Bulgarian ceramic pots that are deceptively small but house a serious amount of food.

The ingredients can be any combination of things like cheese, veggies, pork, chicken, eggs, lukanka or sujuk (sausages), and the casseroles can be covered in a tomato sauce, cheesy sauce, or served in a heartier broth for something like a stew.

My first meal in Bulgaria was a baked dish consisting of creamy, cheesy rice with mushrooms and pork. One of our other favorites was a hot cheese starter with yep, you guessed it, sirene cheese, veggies, and sometimes an egg on top. 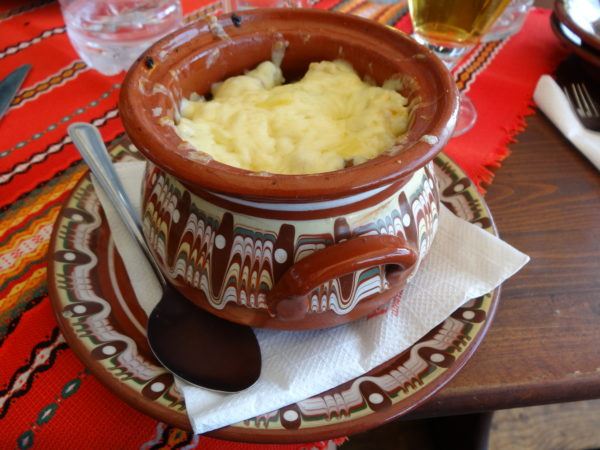 The above are just some of the many amazing foods we tried during the course of our stay in Bulgaria. If you are planning on visiting Bulgaria to try some of this mouth-watering cuisine, I would suggest seeking out smaller towns and villages.

It was really difficult to find traditional Bulgarian food in big cities like Sofia where seemingly every restaurant was either a French café or an Italian place.

Conversely, some of the best food we had in Bulgaria was in the teensy village of Govedartsi at our guest house’s restaurant (located near the Rila Monastery and the Seven Rila Lakes).

We look forward to getting back home and trying to recreate some of these awesome Bulgarian dishes. Of course, a major component in doing so will be sirene cheese, which we hope to try our hand at making. Look for future posts to see how we do!

Looking to try other delicious meals in Europe? Click the previous link to see our six favorite meals from the region!