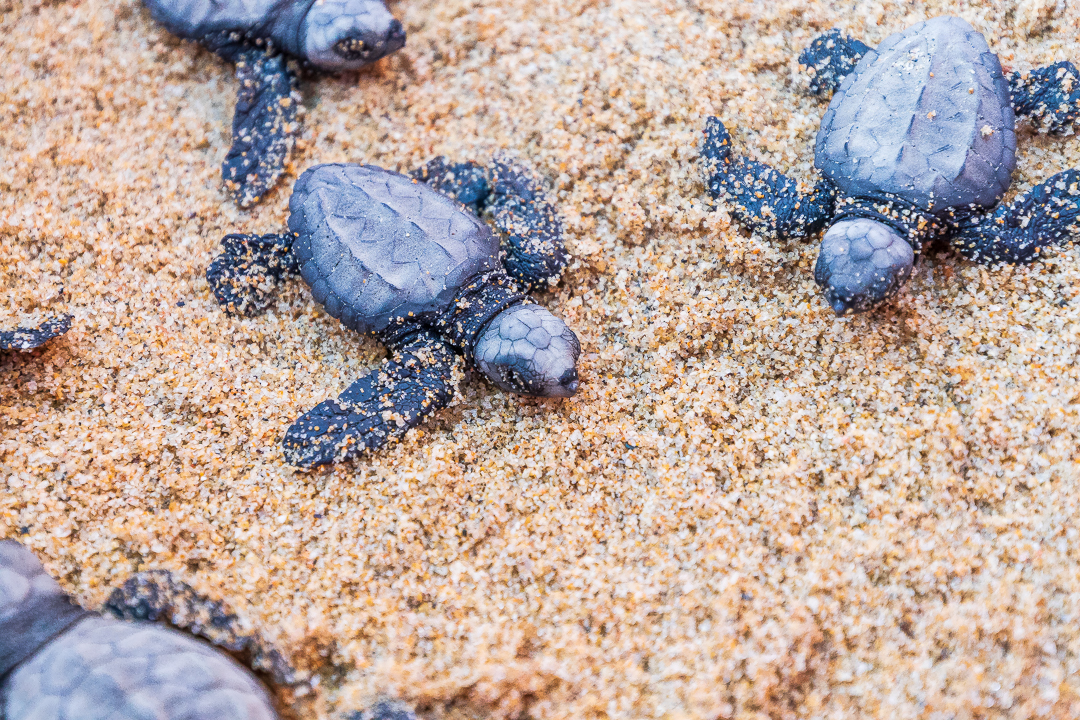 Despite the land itself being primarily desert, some of the best places to visit in Baja California include the opportunity to experience incredible marine wildlife encounters.

Many of these places are quite easy to access regardless of whether you plan only a quick trip by plane or cruise ship or want to make more of your experience by camping in Baja along the way.

And while there are several great opportunities to experience wildlife in Baja in the northern state, most of the marine activity takes place in Baja California Sur where the water temperatures tend to be warmer and more inviting to the animals that make seasonal appearances year after year.

Jacquez Cousteau, the world-famous explorer and marine scientist, once called the waters in the Sea of Cortez on the eastern edge of Baja the “World’s Aquarium” because of the vastness and diversity of its marine life.

And the west coast of the Baja California peninsula bordering the Pacific Ocean also teems with marine life, most of which is transient and makes predictable seasonal returns to the waters where they were born.

Without further delay, let’s get into the best places to visit in Baja California for wildlife encounters.

Where to Find the Best Wildlife in Baja California 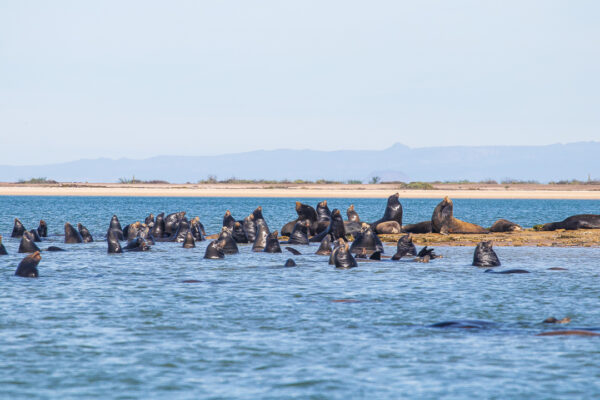 From the smallest baby sea turtles to the largest species of whales, Baja California offers more than just beautiful beaches and the amazing restaurants and activities most often found in its larger cities.

Here are the 6 best places to visit in Baja California and the wildlife you can expect to encounter while you’re there! 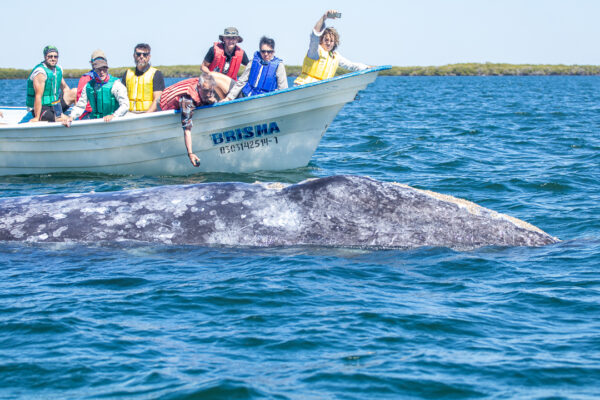 The northernmost Mexican town on our list, Loreto is a cultural gem in and of itself. Situated about halfway down the Baja Peninsula along the Sea of Cortez, Loreto is tucked in the perfect spot where it is surrounded by stunning mountains.

The town is historic, dating back to 1697, and you can still see its rich culture and history strolling through the many pedestrian streets in town. Its mission still stands from its founding and there is no shortage of delicious food, entertainment and art galleries in town.

There are a handful of islands off the coast and going on whale watching tours or sea kayaking is one of the most common activities to add to any itinerary. While you are almost always assured to see dolphins on any trip from shore, one of the most elusive and magical creatures, the blue whale, is known to frequent the waters of Loreto in February and March.

Before the waters warm and the animals migrate north toward Alaska you may also come across orca, humpback and grey whales just offshore as well! 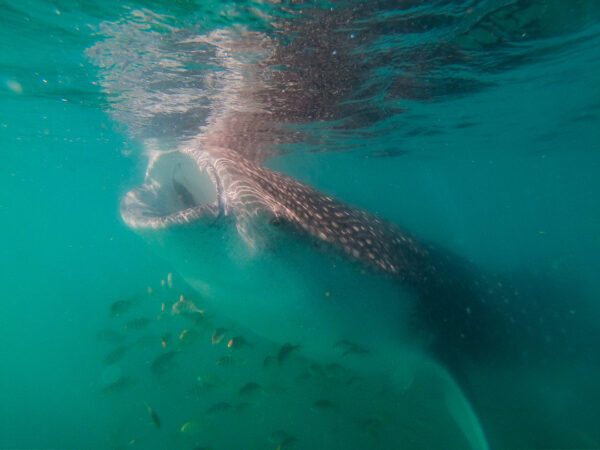 Few people visit Baja California Sur without making a stop for a few days in La Paz. As one of Mexico’s major cities and the capital of Baja California’s southern state, La Paz is a beautiful city that has retained its Mexican charm even as it has become increasingly popular in recent times. The city has everything from world-class dining and accommodations to entertainment and activities sure to fill any itinerary.

La Paz also offers nearly every kind of ecological environment you can expect to find along the peninsula – from sand dunes you can explore to the rocky desert that offers spectacular mountain bike trails. And, no doubt, the city boasts to be home to Balandra Beach, one of the most famous golden-sand beaches of Mexico and a UNESCO World Heritage site.

Balandra Beach is one of the most popular places to visit when traveling to La Paz as you can go stand up paddleboarding crystal clear water or simply relax in the sand at the water’s edge and take in all of the warm weather.

But if the culture, food and land-based entertainment are not enough, the major sea life draw to La Paz are the whale sharks that spend most of the year basking in the warm waters of La Paz Bay.

You can find a boat tour daily from the Malecon in downtown La Paz and you are all but guaranteed to be able to snorkel with whale sharks between October and May. The tours are highly regulated by the government in order to protect the majestic animals.

But you will have the chance to see more than enough whale sharks to make your trip one of the most memorable in all of Mexico’s Baja California peninsula! 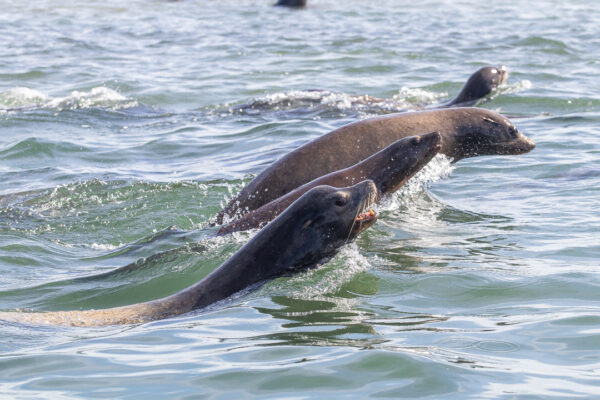 Between Loreto and La Paz, along the Pacific Coast, the San Ignacio Lagoon has recently become one of the best places to book a whale watching tour. The closest town, and a point where many tours are organized, is the oasis of San Ignacio in the center of the peninsula.

The fertile river valley is verdant and full of all sorts of fresh produce. In town, you’ll find craft shops and colorful restaurants along the square which is defined by one of the oldest missions in all of Baja California, Mexico.

Just a short drive to the west, female grey whales migrating from the Alaskan summer waters find the Laguna de San Ignacio a perfect place to give birth to their calves. During the months of January through April, the waters in the lagoon are full of grey whale mothers and their calves who are all too curious and friendly with spectators.

These boat tours are also well regulated to the point that the whales must approach your boat. However, it is a rare day when you do not find yourself encountering a dozen grey whales, many of which will rise out of the water by your boat and allow you to “pet” them.

You can also check out sea lions at a nearby colony where they spend the year basking in the cooler waters of the Pacific. 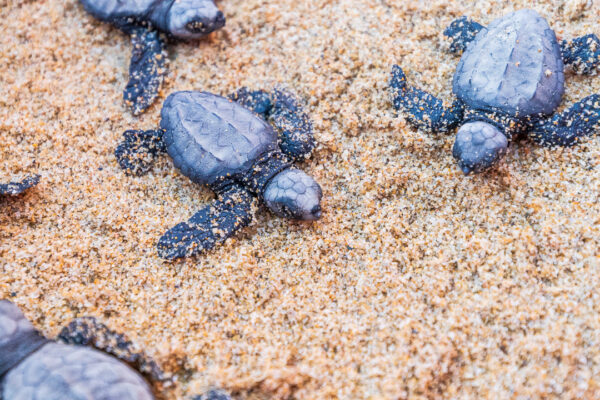 Todos Santos is known as much for the Hotel California as it is for the historic cobblestone streets full of art shops and restaurants. A short 1-hour drive north from Los Cabos, it is easily within a day trip from either San Jose del Cabo, where Los Cabos International Airport is located and Cabo San Lucas, where cruise ships will frequent. And while the artistic culture and delicious street tacos are enough to justify a trip to Todos Santos, the real treat is in being able to release recently hatched endangered sea turtles into the Pacific Ocean.

Every night, most days between November and April, any number of baby sea turtles will be born inside the shelter of the Tortuugueros Las Playitas a short distance from town. Arrive during the day for tours and stay until sunset when the turtles are released with the best chance of survival.

You will also be in awe of the fact that humpback whales can be seen right offshore, spouting and even breaching the surface in spectacular fashion!

Along the East Cape, between La Paz and Los Cabos but cut off by the Sierra de la Laguna mountain range, is the pristine Cabo Pulmo National Park. While many people will visit nearby Los Barilles or La Ventana to enjoy the wind sports along the East Cape, Cabo Pulmo boasts the most beautiful coral reef in all of Baja California, Mexico.

For many years the waters were over-fished and the region was not well known for its marine life. However, local fishermen imposed a moratorium on themselves in order to restore the reef and its once vibrant marine life and now the national park is the very best place to explore the underwater world.

If you scuba dive or snorkel you will find yourself face to face with a variety of colorful tropical fish and coral. Or observe the pristine reef from above as you hike along the water’s edge or paddleboard or kayak. Of course, you can always look for secluded beaches as the road in and out of the park is unpaved and difficult to drive and so few people make the trek out.

The final stop in Baja California Sur is at the very south of the peninsula where the Pacific meets the Sea of Cortez. Here it is no surprise that a variety of wildlife can be found in abundance as it migrates the water around the southern tip of Baja.

The area known as Los Cabos includes both Cabo San Lucas and San Jose del Cabo, two sister cities that offer visitors everything they could want in a tropical destination. From white sand beaches to live entertainment throughout the city, you are sure to get your fill of activities here. The area is home to cruise ships and there are numerous flights in and out of the city.

And if you are looking for wildlife, you can grab any number of tours that leave from Los Cabos marina. Particularly in winter as many of the migrating whales and other sea life are passing between the Sea of Cortez and the Pacific, you can see virtually all of the animals listed in this post.

From blue whales to orcas, grey whales, humpbacks and more dolphins than you can count – a marine tour from Cabo San Lucas will be a great way to either start or end your time in Baja California, Mexico! 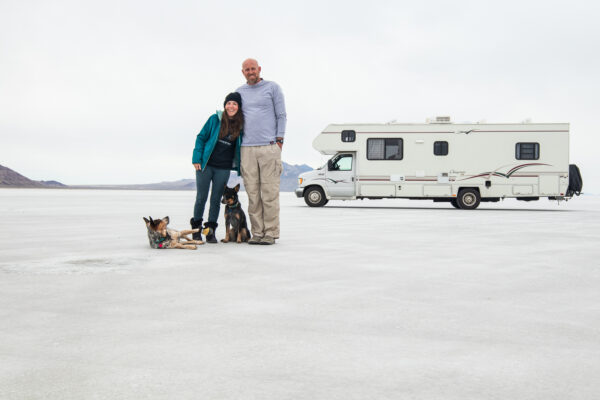 Christopher Harvey has lived out of his RV with his wife and two cattle dogs since 2018 as they’ve wandered the North American continent from Alaska to Mexico. He is the owner of Called to Wander and Van Life Movement, two websites that provide information and inspiration for anyone seeking to pursue their best life on the road.

All images were provided courtesy of Called to Wander.