In many cases the highlight of a city is often the unknown experience that you happen to stumble upon after arriving.  Something that, while isn't the main draw to the city, is one you thoroughly enjoyed experiencing after having planned your visit for other reasons. Our stay in Zurich had one of these appear, and it was only later that we found out how lucky we were for it to happen.

The Zurich Festival (Zuri Fascht) is one of the largest celebrations the city of Zurich hosts and is a 3-day event that happens once every three years.  We arrived in Zurich on the first day of the festival and also happened to only be staying for three days.  Coincidence?  I'm starting to believe in those less and less as this year-and-a-half long trip goes on.

Coming from the USA we are used to festivals, we have one for just about everything.  A major holiday? Festival.  Summer time? Festival.  Saturday night?  Let's light off some fireworks for the fun of it and have a festival for no reason at the same time (true story in Pittsburgh).  To really describe Zurich's festival we need to put them all together for one amazing experience.  It is a bit tricky to do so, but we'll give it a shot:

Zurich's Festival is the combination of a modern festival (games and rides), traditional festival (cultural events), food show, concert, river show, air show, and fireworks spectacular all in one plus more.  Then take that, span it out over three days, and increase its size to cover an entire city.

That is Zurich's Festival.

Even though we come from a part of the world that has the pieces of these festivals on a seemingly weekly basis, this one is different.  It is everything, and that makes it quite an exciting time to be in the city.

The Meaning of the Festival 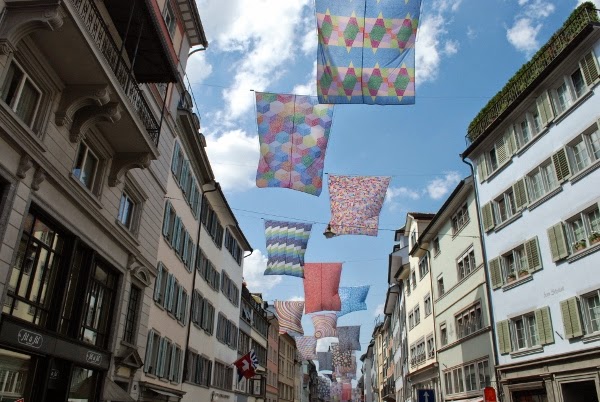 For all the celebrations that occurred during the festival, we could not figure out the meaning of the event.  Being every three years it wasn't to celebrate a particular holiday, like summer harvest or an historical day.  With so many festivities it was also difficult to pinpoint which one was the leading the charge. Was it for the historical aspect?  The food?  It was hard to tell.

The best we could find was on the official website for the festival that simply states the festival is “a unique blend of folk festival, carnival and party highlight pass.”  Couple that with its founding only in 1951 and you have a festival that only has one true purpose – for everyone to come together and have a great time.

After seeing what was a reported two million+ visitors over the course of the three day event, we have to think that it is a complete success.  Although being around that many people in the city the size of Zurich is another issue in itself; one that is very easy to get over with this much fun at every corner.

Trying to Take It All In 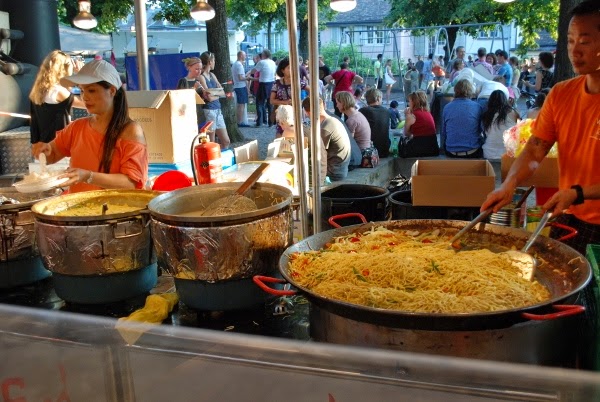 We tried to see as much of the festival as we could during our time in Zurich, while also spending some time seeing the sights we had originally came to see.  A quick glimpse at the schedule of events showed that there were no shortage of displays going on throughout town.  From 10:00 in the morning until the sun comes up the following day the schedule is packed with things to see, so the easiest way to enjoy it all is to just go exploring and see what you find.

The heart of the festival is around the river Limmat and the lake with all of the excess overflowing into the old town for added space.  Because of this it should be no surprise that a number of the performances that can be seen through the crowds are all on the water.  From aerial diving acts to wake-boarder stunts, there is definitely a lot to see while strolling along the river and lake.

Of course, as to not be outdone, the air was full of activity that we caught including skydiving acts and stunt airplanes performing orchestrated tricks.

Our personal favorite treat from the festival was, of course, the food.  While many stalls are set up to sell street food to the masses, our target area was found up the hill in the old town where a mini ethnic quarter could be found.  Numerous stalls from around the world found their way into this tiny part of town including Thai, Chinese, Hungarian, German, French, Italian, Ethiopian, Mexican and many, many more.  For a city that is incredibly difficult to eat a full meal for less than 15 Francs, we were delighted to find that prices ranged anywhere from 6 to 12 Francs for most items in giant portions, a cost saving measure indeed!

One brat, plate of sweet and sour chicken, pulled pork sandwich, and veggie pita later and we were on our way to take in more of the pop-up street performances that the city was offering during the Festival.   Looking up into the air, down into the water, and repeating in rapid succession just to see it all.

But there is only one way to end the evening, and that is with one of the best fireworks performances found anywhere in the world.  The Festival truly goes out with a bang, and the 30-minute displays orchestrated to music on the first and second nights are worth coming to Zurich for in their own right.  The rest, if it even can be thought of as such, is a wonderful bonus.

But for all those reading this, unfortunately you're going to have to wait three years until the next one to experience it for yourself!

For more things to do in Switzerland, check out our articles such as visiting the Schilthorn, or taking a CERN visit.