It is not often that our college education and travel meet on common ground, but when they do there is always an interesting outcome.  You see, Angie and I are nerds.  Engineers to be precise.  We're big fans of science, raw data, and craving the unattainable at the same time.  We travel to find the unknown and use our engineering skill sets when we plan, often a bit too much.

But sometimes our travels bring us back to science, and our recent visit to CERN in Geneva, Switzerland did just that.  As soon as we learned of the free tours offered at the research facility, we knew it would be the top spot for us to visit in the city and we reserved our spot.

A Brief Background into CERN

The European Organization for Nuclear Research, more commonly known as CERN from a previous name, is the largest particle physics laboratory on the planet.  It was founded by leading physicists from 12 European countries in 1954 to foster scientific innovation as well as uniting the previously war-torn nations in the name of science, not politics.

Since then, CERN has grown to be one of the largest research institutions on the planet with around 4,000 employees and over 10,000 affiliated researchers from hundreds of universities around the world.

While many of the scientific discoveries are lost even to us (we're not physicists), some of the notable ones made at CERN over the decades include the world wide web (aka internet), sustaining antimatter for a measurable period of time, and the likely discovery of the Higgs Boson in 2012.

For most visitors, the biggest draw to CERN is to learn about the Large Hadron Collider (LHC), the largest particle accelerator on the planet.  Lucky for us the 2-hour guided tour covers just that! 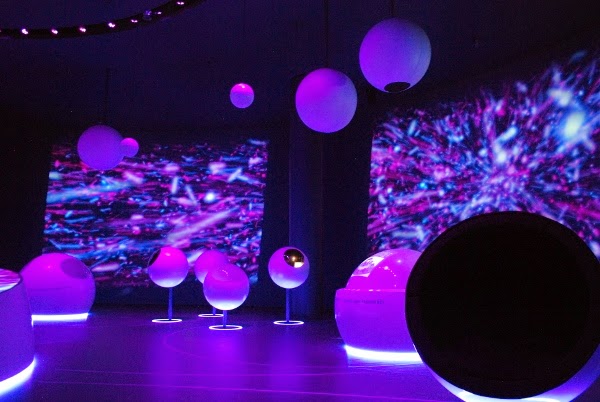 As we learned on our tour, particle physics is a tricky subject.  We all know about protons, neutrons, electrons, and perhaps some even know of neutrinos, too.  Particle physics goes beyond these and instead tries to answer the more fundamental questions of the universe, something that has a whole new set of particles to look into altogether.

The reason for this is because the universe is a vastly different place than it was billions of years ago, shortly after the big bang occurred.  Particles like to exist in harmony with the universe around them, and as the universe has expanded the energy density has become smaller.  The particles that we know of as protons, neutrons, and electrons have come into existence as heavier particles decayed into these lighter counterparts to achieve this equilibrium.

To put it simply, most of the matter that existed at around the time of the big bang is not in the same form today.

To recreate the particles that existed after the big bang, particle colliders were invented.  These machines accelerate protons to nearly the speed of light before allowing them to collide together.  This occurs with such high energy that new particles are created as the energy is converted into heavier matter.  In only fractions of a second, these particles decay into even more new forms of matter.  It is in this small window that sophisticated detectors were created to measure the properties of the matter and gets us one step closer to answering the fundamental questions of the universe.

As even this explanation is relatively technical, our guide told us a joke that helps explain the situation better:

A particle accelerator is like throwing two apples at each other. As they collide they form a watermelon which immediately decays into raisins.  The detectors pick up the raisins and it is the researchers' jobs to put the raisins back together to the form of the watermelon again.

Okay, maybe not the best example, but is the best we've got.

The Importance of the LHC

An explanation of particle physics is all well and good, but why is the LHC in Geneva so important and why is it worth visiting for the non-scientific traveler?

First of all, the LHC is the biggest particle accelerator on the planet.  Not only in its size, about 27 kilometers in circumference but also energy output.  As impressive as that is, CERN is undergoing a renovation of the collider in 2013 and 2014 to double the output yet again, making the LHC seven times more powerful than the next largest on the planet. In fact, computer technology can't even keep up with the amount of data that the tests generate and most of the data, albeit unnecessary, is wasted.

The tours to CERN do not actually go to the collider.  They do not even go to the four major detectors that are used in the experiments.  It just doesn't make sense for both safety and security reasons.  Instead, the tour goes through two of the facilities used at CERN, including the above-ground technical center for the ATLAS detector (used to discover the Higgs Boson in 2012).

In between instructional videos, a visiting researcher gives a layman's breakdown of particle physics and the research that is currently on-going at CERN.  Even for us, our knowledge of particle physics was so skewed that it was nice to have this simple breakdown (although you may need to be scientific to understand that!).

The real treat of a visit to CERN are the two museums that are opened to the public, with or without the guided tour.  These museums illustrate some of the basic and advanced scientific principles studied at CERN in an interactive environment that we found to be quite enjoyable.  Sure, we knew most of the science that was displayed other than the particle physics aspect, but it is always fun to play around when you're allowed to touch things.

But for the history addict, a visit to the CERN museum is like visiting a museum of the universe.  Where else can you learn about the big bang and see the first server for the world wide web in one room?  It is definitely not the Louvre, the Vatican Museums, or even the Smithsonian.

If that isn't enough to interest you on your next trip to Geneva, perhaps our most favorite point will:

For those looking to visit CERN, the two hour guided tour is free of charge yet requires a reservation that we made many months in advance. Access to the museums is free for all visitors regardless of the tour schedule.  When in Geneva, take Tram 18 in the direction of CERN to its final stop (about 20 minutes from the central train station Cornavin).

Disclosure: We are not physicists and do not claim to be experts in particle physics.  Our understanding of the studies at CERN comes from our tour at the facility and brief internet searches (hey, thanks CERN!).  If you happen to be a particle physicist and spot an error, please contact us to let us know!  We must also give a special shout out to our friend Lauren at Never Ending Footsteps who is actually a particle physicist and gave us feedback on this post.

For more things to do in Switzerland, check out our articles such as the Swisspass review, Zurich events (the biggest festival held once every three years), or visiting the Schilthorn.