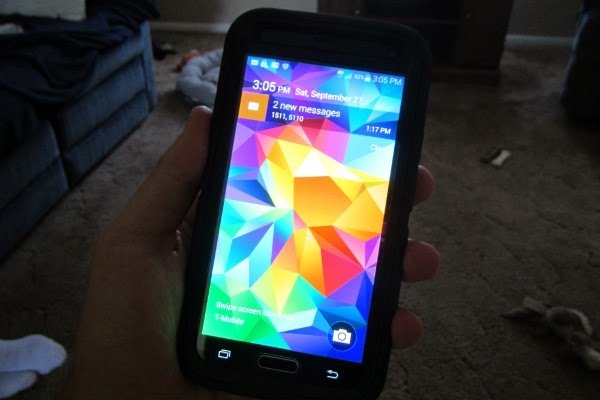 In all of my travels, I never carried a phone.  I'm going to repeat that to let it sink in.  Out of the 66 international countries I've visited, totaling well over 700 days of travel, I never once used a cell phone.  In fact, even when I was at home I never even owned a smart phone.  Crazy, right?

Call it a mix of wanting to save money and not getting hit with roaming charges when abroad, but the truth of it was that I never had any desire to be that connected.  When I was out exploring I didn't want any distractions, and I loved every second of it.

But now that I use a phone when traveling, I wanted to have data on the go. Naturally, I purchased my first smart phone with a Simple Choice plan- a T Mobile international data plan with data and text included in 200+ countries.

If I'm going to do it, it will be done right, and with a starting price of $50/month I was sold.

I'm still very much a fan of the notion of “when I travel, I want to be disconnected.” But at the same time I also have the added conundrum now that when I do travel, it may have more business attached to it as I've been getting sent on assignments via this website.  (Also, I wanted Instagram.)

It was if a giant billboard was flashing in front of my eyes saying “You have to do this, you idiot.”  So I did. (…and Instagram is amazing).

The major selling point to me for T Mobile data roaming on the Simple Choice plan was the free data usage in 200+ countries for accounts based in the USA. In my opinion this is a game changer, and I am quite surprised that a cell phone carrier is bold enough to offer that.  This means no more accidental $1,000+ surprises, and a great relief to cell phone users everywhere.

But I'll tell you a secret, on my first trip abroad I was incredibly paranoid.

Are You Sure I Won't Get Charged?

When I landed abroad on my first trip with my phone (a Samsung Galaxy S5), I turned it on and nothing happened.  There was no time adjustment, no welcome to France text like I was supposed to receive, not a single thing was different.

I was incredibly confused.

After playing with the settings a bit, I noticed that my data roaming box was unchecked.  Now, based on the start of this article you can imagine that I know very little about smart phones. But what I did know was that the data roaming button is what causes those $1,000+ bills I was hoping to avoid.

It was also the button I needed to check to get data internationally.

With great hesitation I checked that button, and a whole new world opened for me.  The welcome texts began, my time updated to France time (with a side-by-side home time clock too- love it), and within moments I was told I had a 3G connection and I was updating Facebook telling all of my sleeping friends and family that I had landed.

It was completely amazing, until I remembered reading that T-Mobile Simple Choice plan is supposed to only provide only up to 2G speeds for free data abroad (around 128kbps).

My paranoia began all over again.

The Problem With 3G and 4G Abroad

You can imagine the state I was in when I realized this. I had already used around 50MB of data, worth about $750 on the old fee structure, when I asked myself if something was wrong.

I googled it, on my phone no less, and found very few encouraging answers.  Crap.

As it turns out, and with a significant amount of research, the T-Mobile data connection does connect to 3G networks abroad.  So if you found yourself reading this post after searching due to the same kind of panic attack I had, you can breathe easy. The thing is that the 3G data you are receiving is throttled, meaning that the max speed is capped just under 3G speed in order to remain free.

Even with that suggestion from a random article I found online, I wasn't convinced.  It wasn't until 24 hours when my data usage posted that I finally began to breathe easy.  Looking at the dates I was abroad the service structure I received was no different than before I left- and it was reflected on my bill that way a few weeks later.  No charges for data and barely even a blip that I was out of the country!  (I did make a few phone calls, so my international call bill was around $2 thanks to the laughably small $0.20/minute rate).

Unfortunately, Your Bill Will Not Be $50/Month

If the previous section of this post has you wanting to run out and pick up a T-Mobile plan, I won't blame you. Throughout the two weeks I traveled around Paris and Sri Lanka I had amazing coverage, and the only times my data plan did not work were also in places where those with local SIM cards also had spotty coverage as well.

I just need to let you know that your bill will not be $50/month.

My bill for that very same plan is actually $92/month.

There are a few reasons for this.

But when it comes down to it, these fees are inline with most standard smart phone contracts, yet T Mobile international coverage includes 200+ countries as a perk.

Considering I used $90+ worth of data at their old $15/MB rate while still taxiing in to the gate when I landed in Paris (a paltry 6MB), you can imagine I am a happy convert.  Or at least, I would be if I ever had a phone to compare it to in the past.

By my gushing you may wonder if this post was sponsored.  It was not.  I am paying off my phone and the service fees mentioned above as described, and truly love the service.

7 thoughts on “Does the T-Mobile Really Give Free International Data?”