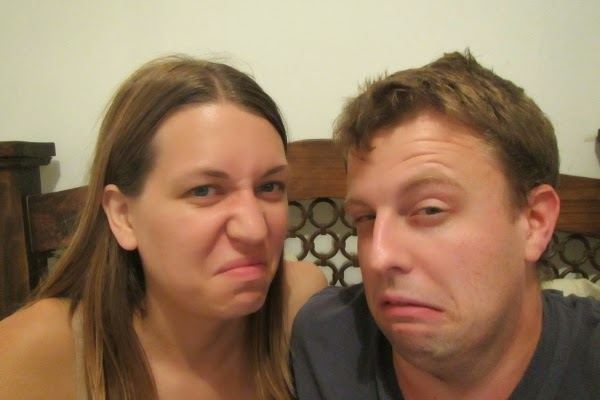 Enjoying the surround sound of a half-dozen Colombian men getting it on with their mistresses during our stay in a sex hotel was not something I would have put on my bucket list.

But it happened anyway.

Welcome to your first night in Colombia!

How We Had a Stay in a Sex Hotel

This wasn't a planned outing.  We had no interest in heading to a hotel that is mostly frequented by locals who have only one thing on their mind- and it isn't getting a good night's rest.

We just kind of ended up there, well, because we had nowhere else to go!

The problem with traveling between Ecuador and Colombia is that it is highly recommended to stop on the Colombian side at the border town of Ipiales to avoid traveling at night.  These roads are horribly dangerous, not only because they are mostly on the sides of cliffs with no railings, but also because the hills are full of bandits.

Not wanting to be robbed on this trip, again, we decided to play it safe and stop at the border as recommended.

We jumped in a cab to go to our intended hotel, a more expensive place that had wonderful reviews, but neither the taxi driver nor anyone in town knew where it was.  How that happens in a city as small as Ipiales, I have no clue.  But not having the address for the hotel, we were out of luck.

After significant bickering, Angie decided we would give up and go to our second choice, a hotel near the bus station that had decent reviews with a few flaws.

Okay, It Isn't Really a Sex Hotel Per Se

If you came here expecting us to be sharing photos and stories from our time in the honeymoon suite with a champagne glass shaped hot tub, or a room with mirrors on the ceiling and a spinning bed, I apologize for disappointing you.

The hotel we stayed in was not like that.  Although, given the circumstances, I rather wished it was.  Maybe next time.

While it was not the type of sex hotel you would have hoped for, there was blue felt on the walls, and a toilet with no seat (who does that, really?), making it a little different from what you'd come to expect from any random place in the middle of nowhere.

If these had been the only items out of place, we would have never given the hotel a double take. But then the audio started.

The men sounded like they were having a great time, but the women, well, I'm sorry to say it fellas, she was faking it.

Somewhere between the chorus of oohs, ahhs, and beds squeaking we blacked out, all while hoping we would not be woken up by it during the night.  We were lucky and missed out on it all out of pure exhaustion until our blissful sleep was interrupted by a screaming toddler running down the halls back and forth at 5am.

It didn't take much to understand the child's frustration.  He was staying in a sex hotel, too, and something tells me he did not get a lot of sleep the night before.

Have you ever had a hotel misstep on your travels like this one? Perhaps you had a stay in a sex hotel too? What happened and how did you endure?  Comment below to join the conversation!

Or, for something a bit more practical, how about checking out the world's tallest palm trees in Salento, Colombia.