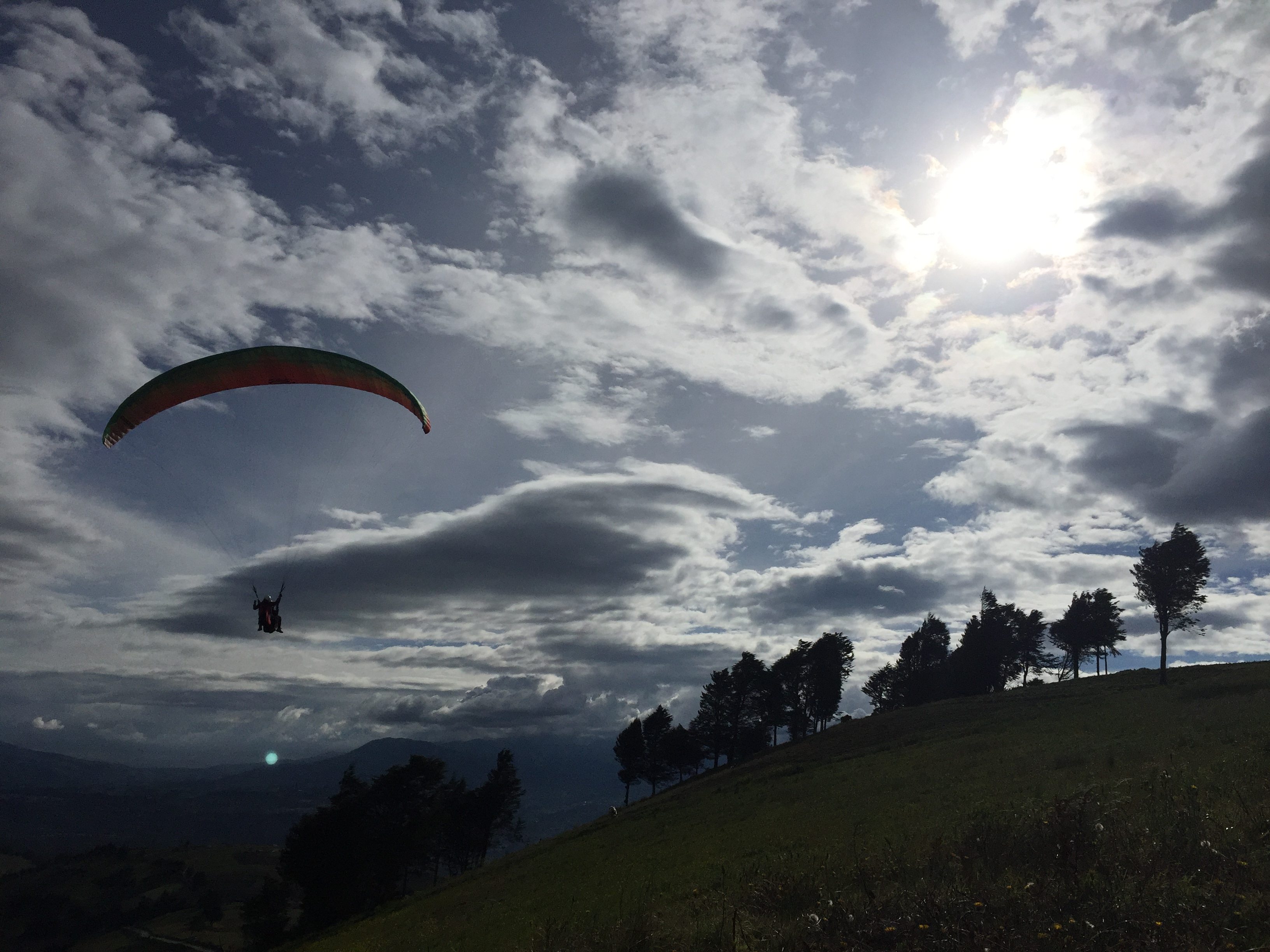 I always sort of panic when people start giving me instructions for tandem extreme activities. When I first went skydiving a few years ago, I remember wondering wildly if I missed a step would we crash to the ground, life flashing by my eyes?

As the paragliding instructor in Banos, Ecuador, drilled into me a bunch of instructions, I had similar thoughts. Wasn't I paying a professional here to do it for me, thus negating the likelihood of plummeting to my death?

I struggled to pay attention to the seemingly endless number of steps. Run forward, run backward, run forward. Put your arms this way, then that way.

No, never that way.

A Near Miss in Heading Out

I had had to cancel white water rafting after cracking my ribs canyoning. The day before, I had dragged myself to the paragliding office and insisted they allow me to try on the harness to see if it would cause undue pain on my rib cage.

Since my limited Spanish couldn't really convey a rappelling accident, I'm sure they thought I was slightly insane dressing up in the harness and jumping about in their office. Nonetheless, the harness is more of a little fabric basket you sit in, and doesn't cause any pressure on your sides.

My trip wasn't ruined after all.

Still fuzzy on the details of my part in not getting us killed, we set off for a drive high up into the hills north of Banos. The last couple of days the lack of wind had meant a lot of cancellations for paragliding. As we clambered out of the truck, I was nearly knocked over by the wind.

I wondered aloud if there was a thing as too much wind for paragliding and was rewarded with a shrug from my instructor. Great.

Getting So Very High in Ecuador 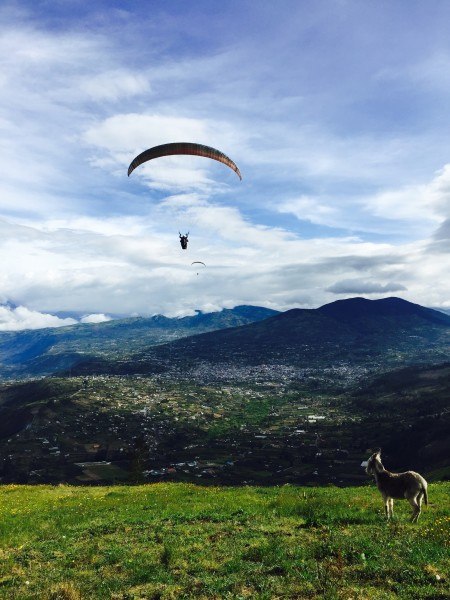 We were high. So very high, I noticed gazing down at the tiny city below. I always hope to go first because the longer I watch others do it, the more nervous I become. Sadly, I was the lightest person in the group which meant a change of parachutes. I would be last.

I watched the others suit up and get hooked up to their chutes. Almost immediately they were airborne. It looked so easy, reminding me of tossing army men off the upper landing of the stairs and hoping their parachutes would open and catch.

These parachutes certainly did. Up, up and away they went. I swallowed hard as I watched how high they went.

The only other girl began her landing, only to hit the ground, fall over and be dragged about thirty feet by the wayward parachute as everyone went scrambling to stop it. I pictured my ribs being dragged along the solid ground and cringed.

Suddenly it was my turn. A weight bag was hung in front of me, practically dragging me to the ground. I was instructed to run but struggled with the weight bag, resulting in a comical video of another guide yanking me to and fro until air caught the chute and we were going up without any input from myself. Just the way I like it.

Going up was easy. We floated this way and that, taking in the city way below us. It had been cloudy when we took off, but the longer we stayed up, the clearer the sky became, until it was absolutely gorgeous. My guide was oddly silent the entire trip, making it feel as if I was the only one up there.

A Failure to… Land 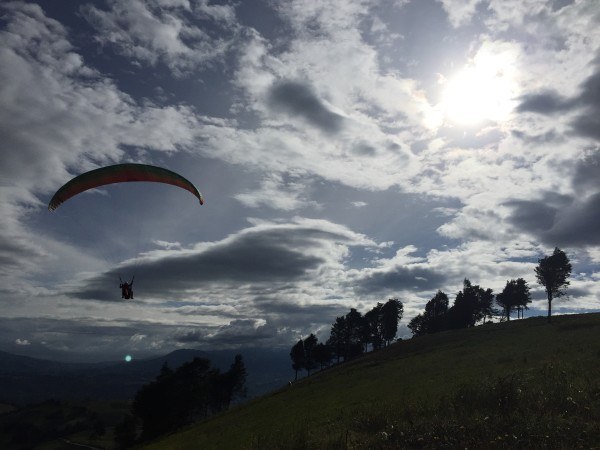 Finally, the walkie-talkie crackled as someone on the ground let us know it was safe to begin our descent and landing. A quick tug and we were whipping downward in tight circles as my stomach attempted to stay up where we had started. I hate the roller coaster feeling; I hate it even more as we are hurtling to the ground.

We came in for our landing and were yanked back up by the wind. Ok, no problem, we would just try again I assumed. And we did. About seven times. Just as I began to imagine a life as a permanent wind-dweller, I was instructed to put my arms straight forward and get ready to run.

After forty minutes of complete silence, the guide's voice was startling and I attempted to run while still in the air. Someone on the ground grabbed my ankles and pulled me to the grass, closing down the parachute with a firm yank on some ties at the same time.

I stood around for the next few minutes with my harness-chair hanging awkwardly from my body, seemingly forgotten while all of the parachutes were packed away. Finally, I was freed and wandered to the edge of the hill to watch some other paragliders in the far off distance, marveling at the experience.

This is one experience I can't wait to try again.

1 thought on “Things to Do in Banos, Ecuador – Paragliding”